One of the most common questions y’all send to me and that I’m also asked frequently in my own practice with families are questions surrounding hallucinations, delusions, and psychosis.

Some of you have written to me saying: 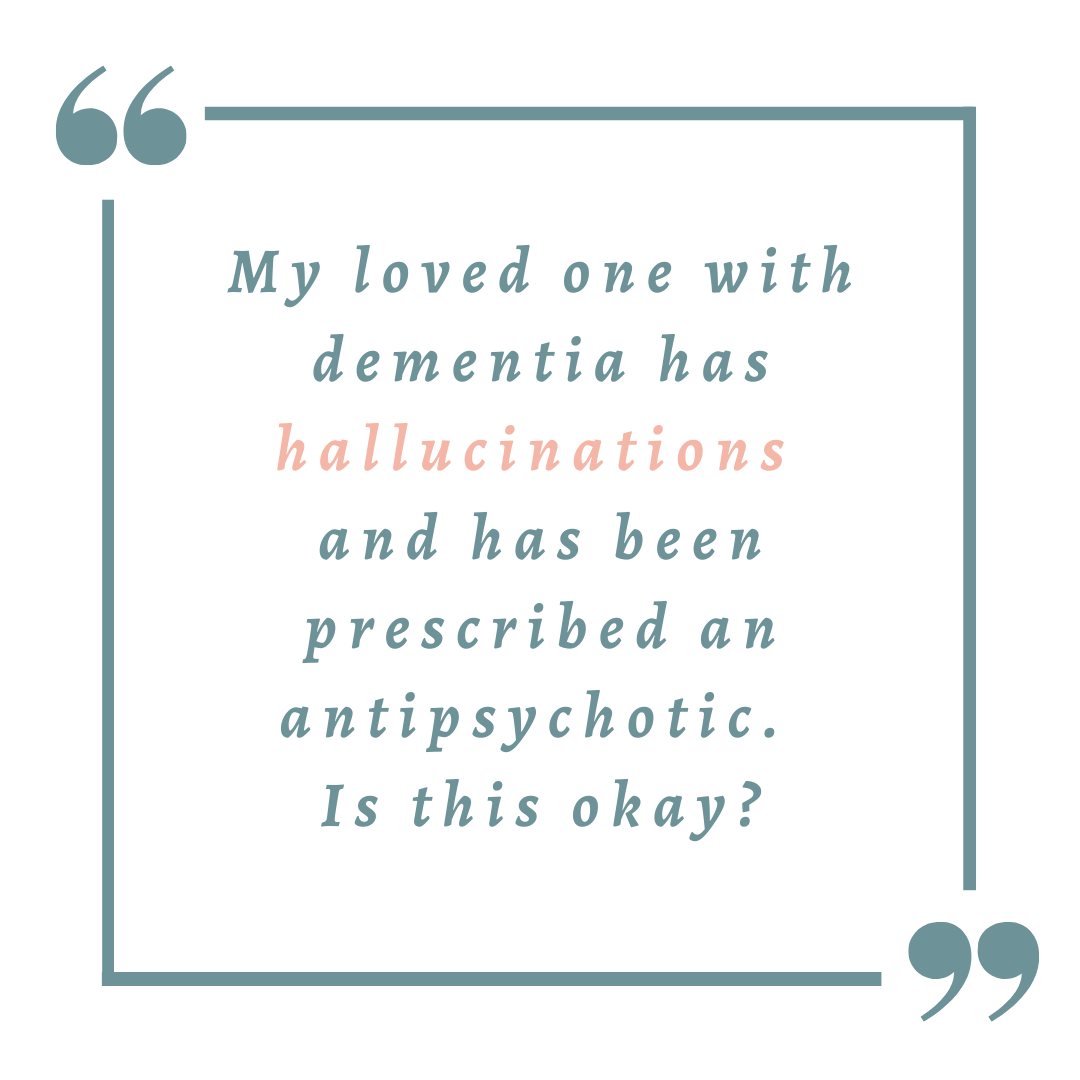 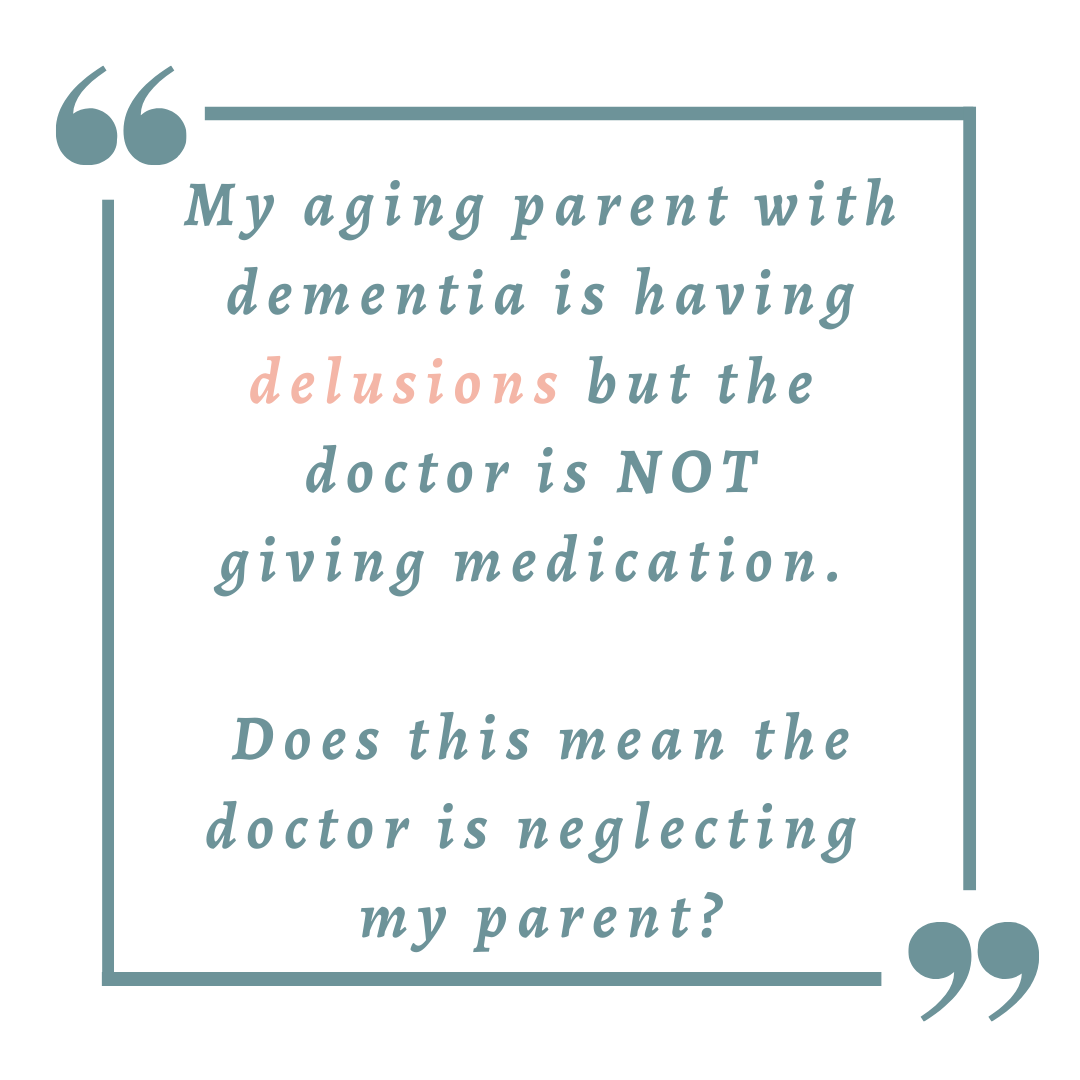 In this interview, Dr. Frank answers these questions and so much more about hallucinations, delusions, and antipsychotic medications in the context of dementia disorders! This is the second of a 3-part interview with Psychiatrist, Dr. Lisa Frank.

Lisa Frank, MD is a board certified psychiatrist with special interests in geriatric psychiatry, trauma, and mood disorders. Dr. Frank has practiced in a variety of clinical settings, including inpatient psychiatry units, partial hospitalization programs, and outpatient. She has served as Medical Director for two acute psychiatric inpatient units and is a former faculty member of both Morehouse School of Medicine and Emory University School of Medicine, both in Atlanta, GA. Dr. Frank currently works in a community mental health care setting.

Here’s a sneak peek at what you’ll learn from my interview with Dr. Lisa Frank:

What are hallucinations and delusions?

Psychosis is an umbrella term that encompasses experiences that are not reality-based. For example, under the umbrella of psychosis are hallucinations and delusions. 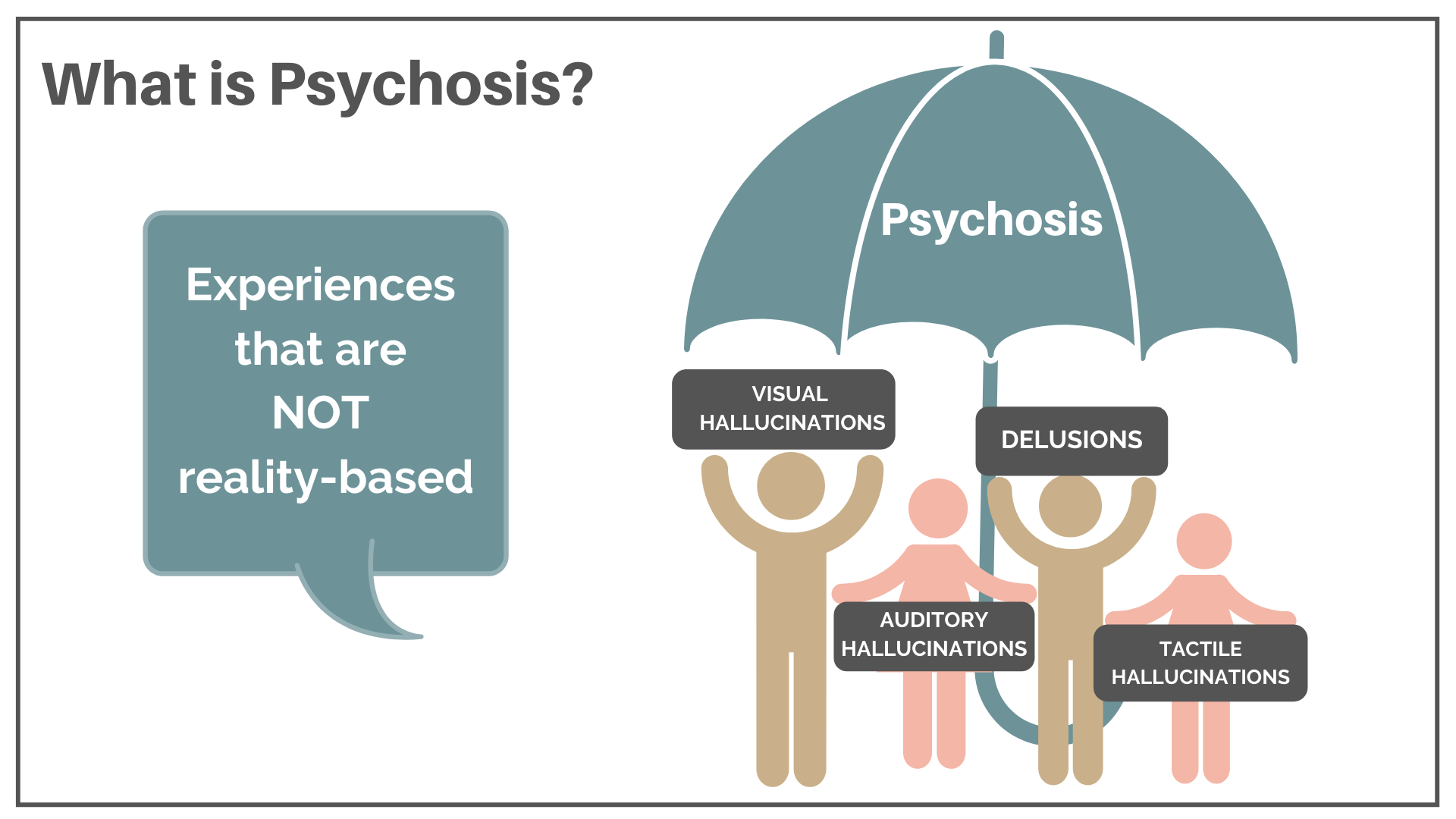 It’s important to know that hallucinations are not misinterpretations of cues. For example, a person may hear music or voices in their head but there is no auditory stimulus in the environment. 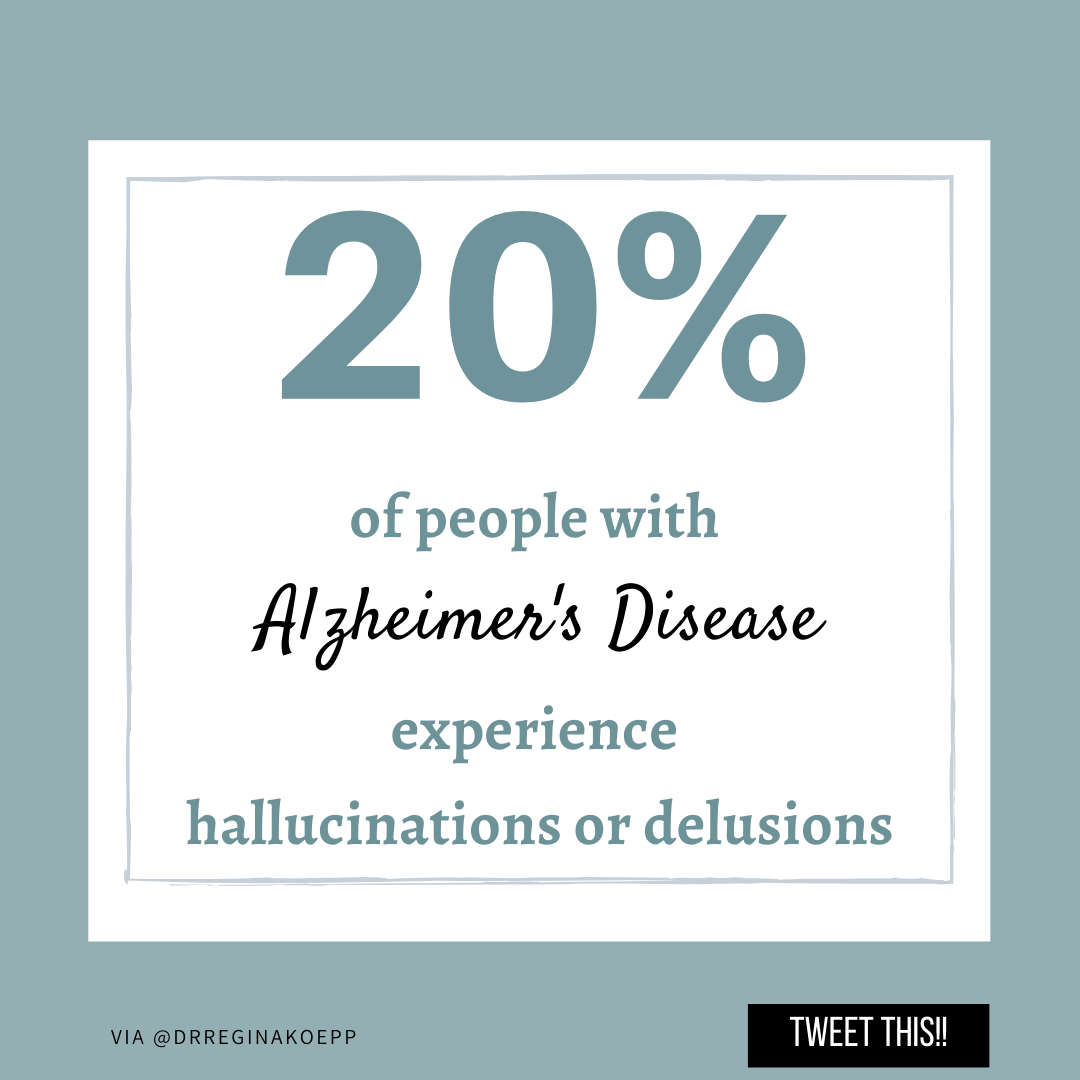 Same goes for visual hallucinations. If you see a chair in the corner and it kind of looks like a person and you startle, then realize that it was a chair, this is NOT a hallucination. Common hallucinations are seeing a loved one who has passed away. Or, for certain dementia disorders, like Lewy Body dementia for example, it is quite common to see small children or animals. 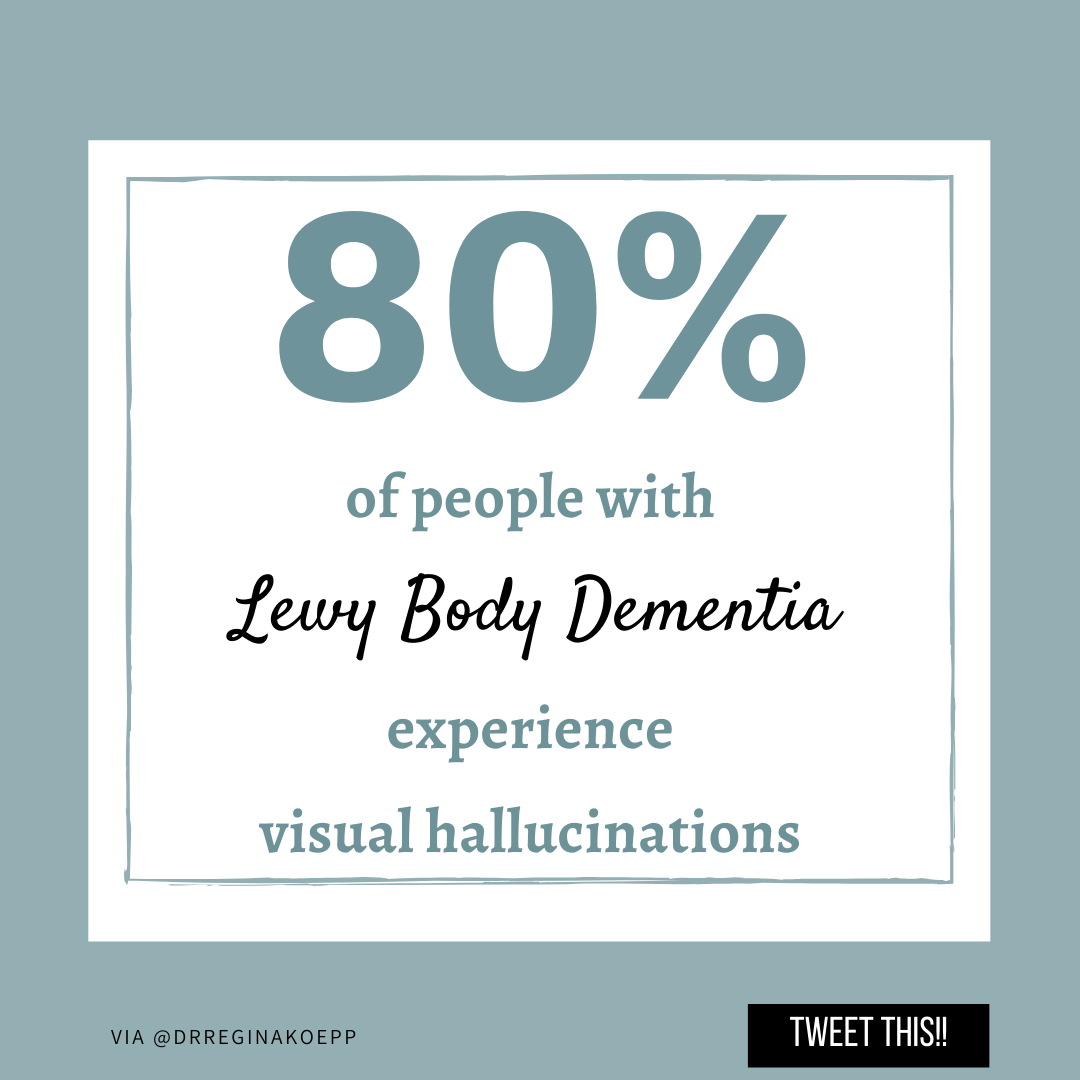 Olfactory and Tactile Hallucinations are the less common, but do occur. For example: sometimes people will say they feel like they have bugs crawling on their skin and pick at their skin incessantly, sterilize their environment, call in the exterminator, etc.

We see a range of psychotic symptoms, hallucinations and delusions in people with different types of dementia. And to complicate matters, we also see these symptoms in people experiencing delirium.

But with dementia, what we commonly see early on are delusions.

Delusions are beliefs that are not reality-based. A common one with dementia is that “someone is stealing from me”. So we have a housekeeper who’s been coming for years and years and as a trusted person and, and we value her input in the family. And now, mom is saying, well, this person is stealing from me and you know that it’s not true. But, mom very much believes that. So that would be a paranoid delusion.

How to manage delusions

When a person has a delusions, it is very important to NOT argue and DO NOT try to convince your aging parent that they are wrong – reasoning doesn’t work with delusions. This is very challenging for most families I work with. You want to set the record straight, tell the truth, clear the air, but these tactics don’t work when it comes to delusions.

So what does work: the best thing to do is to reassure (give comfort and support) and then redirect to a different topic.

When to treat hallucinations and delusions in folks with dementia?

There are many variables and costs and benefits that go into deciding whether or not to treat hallucinations and delusions in folks with dementia disorders.

The short answer is that when hallucinations are: 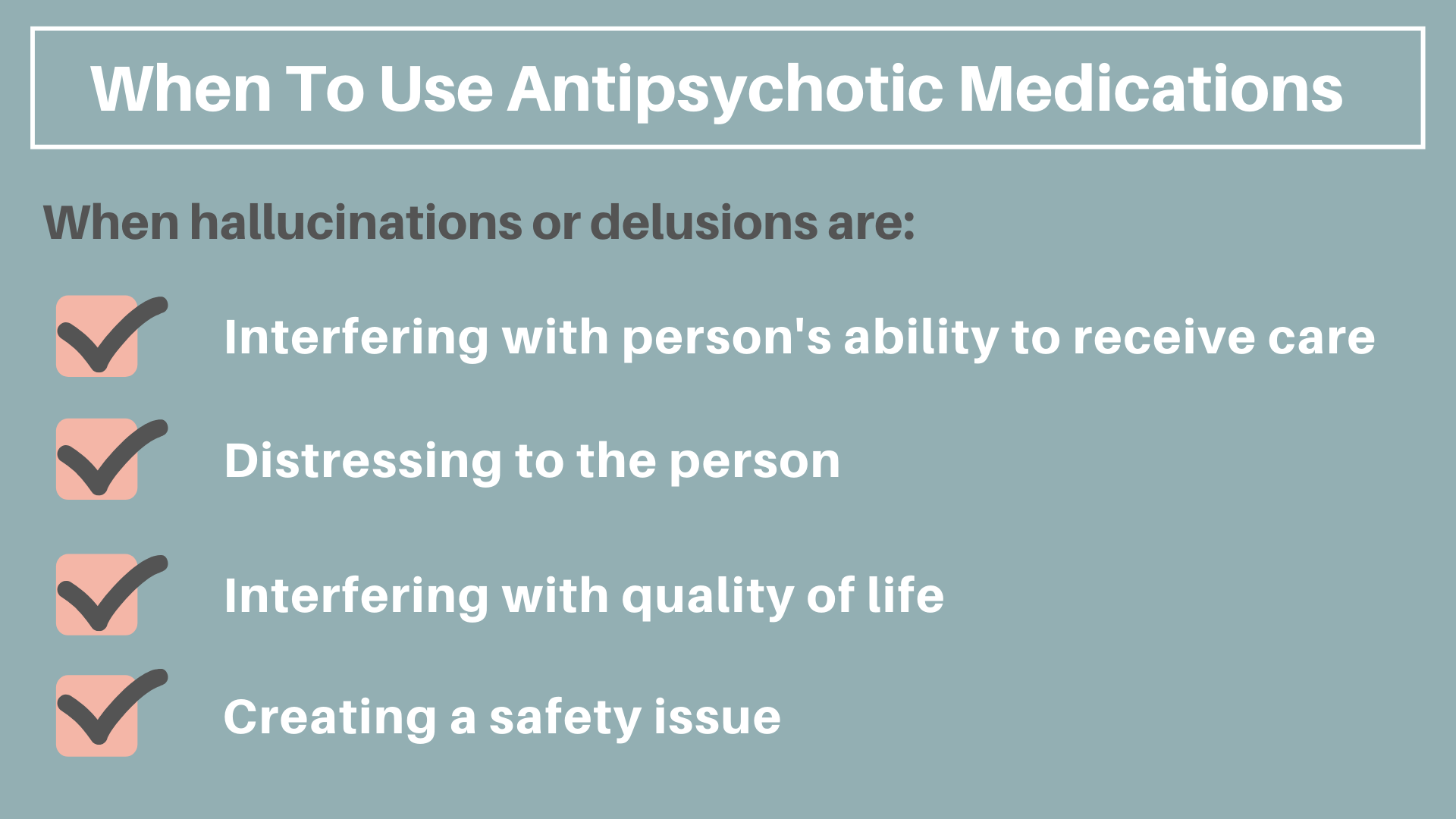 The general rule is that we want to use the fewest number of medications possible to give the best effect. And typically antipsychotics should not be the first line of treatment for hallucinations and delusions.

As you can see, it’s quite possible and even healthy for a psychiatrist or a physician, NOT to prescribe an antipsychotic to a person with dementia who’s having a hallucination or delusion. And that’s because medications have side effects. And, antipsychotics have very unwanted side effects.

Antipsychotics and black box warnings for use in folks with dementia

In folks with dementia, there’s a black box warning for a-typical antipsychotics. A-typical antipsychotics are the newer generation, the second generation of antipsychotic medications. The black box warning is because we have found over time that there is an increased risk of death in patients who are prescribed those medications and have an existing diagnosis of dementia. And so they carry a great deal of risk and we are always conscious of balancing risk and benefit. So there has to be a significant benefit to be gained in order to justify the risk of adding that medication. 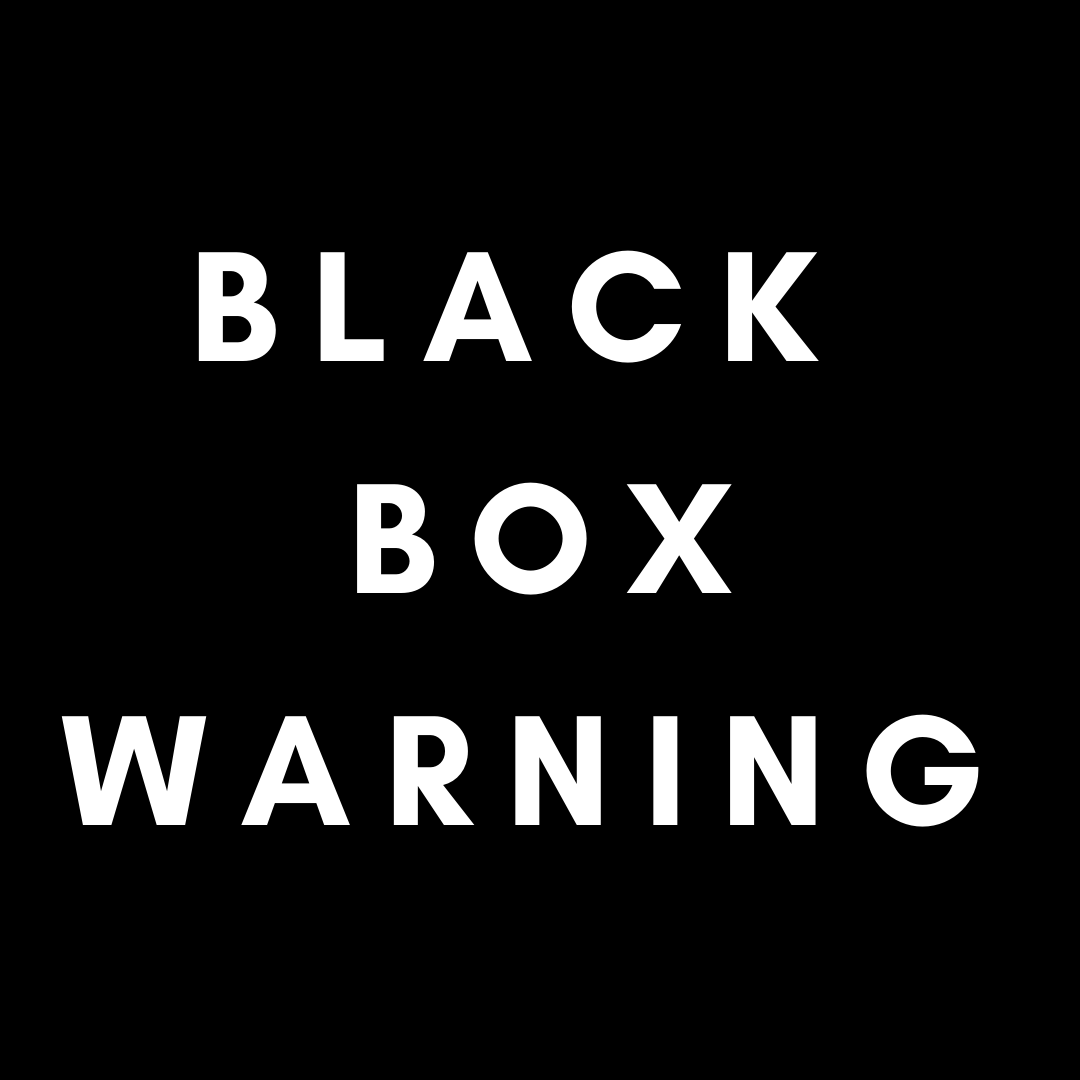 What is a black box warning?

A black box warning is an Food and Drug Administration (FDA) warning for this medication for a specific patient population. And in the case of a-typical antipsychotics, there’s an increased risk of death related to typically cardiovascular effect, cerebrovascular events, and some types of infection, usually pneumonia or respiratory infections. And that is why these medications are at a higher level of risk for patients with dementia.

Does this mean my loved one with dementia should NEVER take an antipsychotic medication?

Even though there is a black box warning, it does not mean that this medication should never be prescribed. It means that that healthcare professionals should go through other steps before moving to that medication.

CAREGIVING TIP: If a physician is thinking about prescribing an atypical antipsychotic for treating challenging symptoms that come with dementia, the physician should be having a conversation with the person living with dementia (if they are capable) and/or their family so that you understand that this medication puts your loved one at an increased level of risk. In this case, the idea is that all other non-medication interventions (behavior modification) and other less harmful medications have been tried and no longer work.

Why is my loved one prescribed an antipsychotic medication when they don’t have hallucinations or delusions?

Sometimes in the later stages of dementia, people can become very agitated and restless. The first line approach is to use behavioral interventions, but there may come a time that these interventions no longer work and the person remains agitated (e.g., repeatedly trying to break windows to escape a memory care setting, spitting and yelling at others, etc). And so they’ve stepped up to the use of perhaps a low dose antipsychotic medication for agitation or behavioral symptoms. And in that case, the provider – the psychiatrist or the primary care doctor – hopefully has had the conversation with the family about the black box warning and why they’re moving to that medication. (Like described above.)

Why are antipsychotic medications prescribed when there is an episode of delirium?

Depending on the cause of the delirium, your aging parent may require treatment with a low dose antipsychotic. It may be started while they are medically hospitalized being treated for whatever is causing the delirium. And, they will likely be discharged on the antipsychotic medication because they’re still recovering. But this medication should not be used indefinitely, especially if it was started for a delirium. It should be stopped at some point after your loved one is discharged, but sometimes it’s not.

MEDICATION TIP! If your loved one has been home from the hospital for a while, please talk with their outpatient provider about continuing to use this medication. Learn more about delirium here!

Want to learn more about dementia?

Here’s an important freebie I made just for you, It’s called,  Dementia 101: A Beginner’s Guide to Dementia Disorders. In it, I describe what dementia is and isn’t. I describe the phases of dementia and what to do if you’re worried that your aging parent may have dementia. So, take a moment to download it. It answers some of the most frequently asked questions I get about dementia! 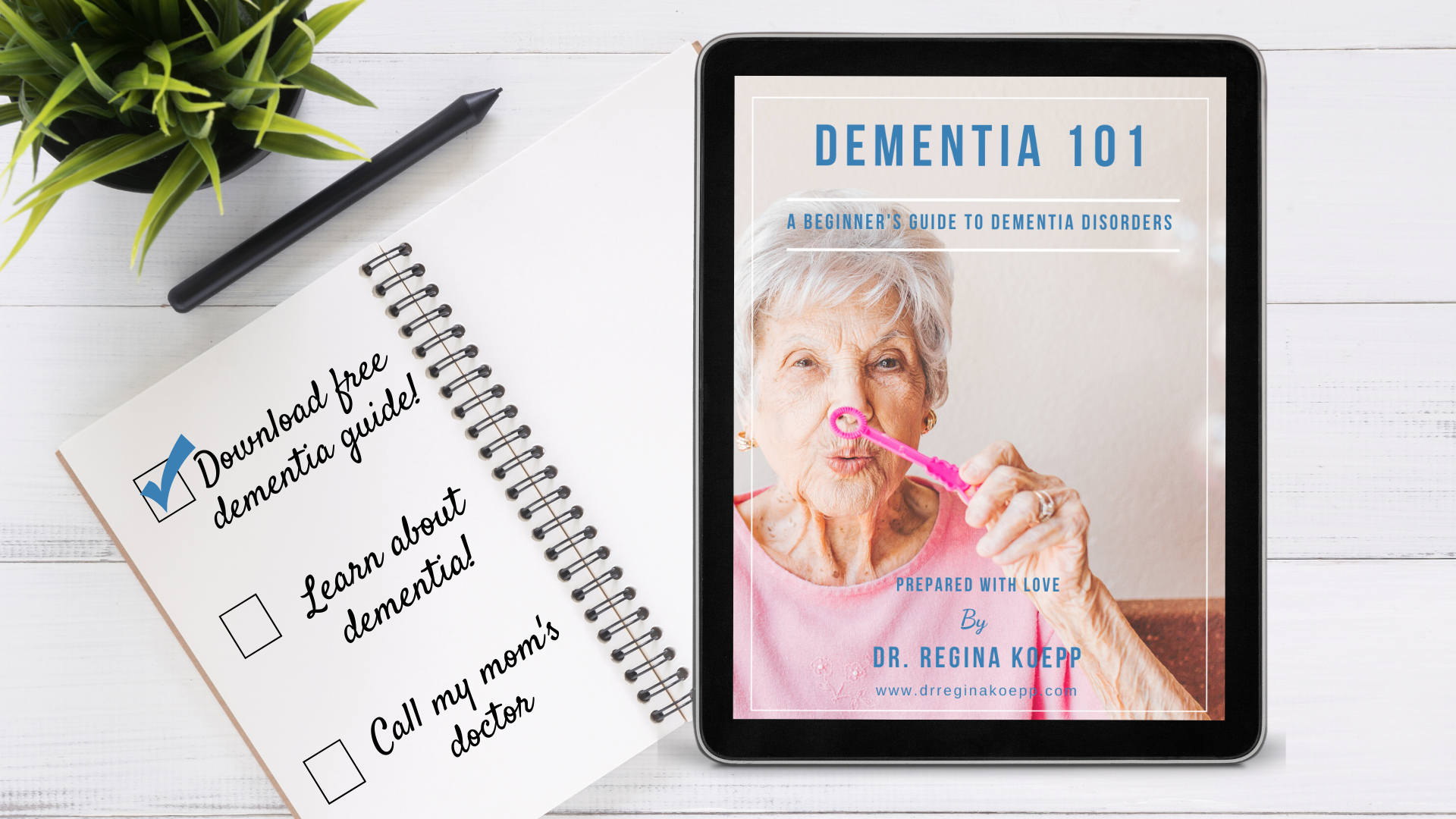 Here are some episodes that can broaden your understanding of dementia and caring for someone with dementia as well!

Want to learn more about delirium and dementia?

That’s all for today! If you have friends who would benefit from this information, please share this video and article with them, because nobody should have to do this caregiving thing-alone.

Lots of love to you and your family.