These statements about older adults make the assumption that with aging comes serious cognitive problems, like dementia! But, these ideas are actually not supported by science and in fact, are a myth.

In today’s episode, I answer the question…

Is Dementia a Normal Part of Aging?

Here’s a peak in side the episode:

At the end of this episode, you’ll have a better understanding of what dementia is, and what to do if you’re concerned about memory problems in someone you love.

Why do I want you to know that dementia is not a normal part of aging?

If you believe that significant memory loss comes with age, you’re more likely to put off necessary medical evaluations, which help to identify if there is a dementia disorder causing memory problems or some other medical condition that needs to be treated or managed.

The sooner you can work toward a diagnosis and a plan, the more empowered you and your loved one will be in living a life with dementia or whatever the condition is!

Links mentioned in this episode:

You've heard people say she's doing great. She's old, but she's held there. Or he's 90 and still so sharp. These statements about older adults make the assumption that with aging comes serious cognitive problems like dementia. But these ideas are actually not supported by science and in fact, are a direct result of ageism. Ageism sucks. Let me tell you what it is. Ageism is bias and stereotypes based on age. And it affects older adults more than any other age group. So, one of the ways that it affects older adults is in this belief that dementia is a normal part of aging. And let me just say, dementia is not a normal part of aging.

I'm Dr. Regina Koepp. I'm a board certified clinical psychologist and I specialize with older adults and families. I created the Psychology of Aging Podcast to answer some of the most common questions I get about aging: Questions about mental health and wellness, changes in the brain like with dementia, relationships and sex, caregiving, and even end of life. Like I say in my therapy groups, no topic is off topic, we just have to have a healthy way of talking about it. So if you're an older adults are caring for one, you're in the right place. Let's get started.

In the last few episodes, I've been talking a lot about memory loss warning signs, what to do if you're worried that your older loved one has memory loss and the benefits of early detection of dementia. If you missed those episodes, you'll want to listen to this one then go back back and listen to those. I'll link to them in my show notes. You can also learn more about memory loss downloading my free Memory Loss Guide, which you can link to directly in the show notes or by going to my website www.drreginakoepp.com/memoryloss. All right, let's get started.

2:28
There is a big myth out there that with age comes dementia. Okay, so with age, the risk for dementia does in fact increase. But it's important to know that dementia is not a normal part of aging. Okay, so what is dementia? Dementia is a general term that we use to describe a certain type of brain condition that affects cognitive function. cognitive function, yes, cognitive function. So cognitive function is a fancy term for how the brain thinks remembers processes information reasons, or uses judgment to solve problems, and so much more. Dementia is a neuro degenerative disorder. So I'm going to break it down. Neuro means brain. Degenerative means to get worse over time, degenerate. And disorder, meaning that it impairs function. Like impairs a person's ability to work or drive or manage money, care for themselves, you get the idea. Dementia includes progressive memory loss, but that's not all. Dementia is not only memory loss, and so my last few episodes are a little bit confusing because I've been saying memory loss, memory loss, memory loss. And so I'm kind of adding to this misconception about memory loss and dementia. But I did that because most people don't know this. Most people don't know that dementia is NOT ONLY memory loss. And so I wanted to capture your attention and use words that you're familiar with. So I could get you to this episode to teach you a little bit more about dementia. Dementia, like I said, is not only memory loss, it must include at least one other cognitive process like language (or not being able to hold a conversation) or like judgment (might be like giving telemarketers money when your loved one would never have done that in the past). These are just a couple of examples. But with dementia, impairment in cognitive function also makes the person unable to complete basic functioning tasks like driving a car or managing money.

Dementia is a general ("umbrella") term. Underneath the umbrella are different dementia disorders.

6:06
All types of dementia are progressive, meaning that they get worse over time. And sadly, at this time, there is no cure. And this makes it really hard because when we think of other illnesses like cancer and heart disease, we think, okay, cancer, we're gonna fight it or heart disease, okay, I'm going to change my diet, and it's going to get better or diabetes, I'm going to change my diet and exercise and then and then I'm not going to be I'm not maybe I won't have diabetes anymore. Maybe I'll recover. And the the tragic thing with dementia is that there is no recovery. We can help people to slow down the progress of dementia and I talked a little bit about that in my last episode about the seven benefits of early detection of dementia disorders. We can help people slow it down but there is no cure and there's no recovery. And that is devastating.

7:05
Let me go back to the different types of dementia disorders. So while the beginning stages of the different types of dementia disorders can look really different, the end stages of most dementia disorders look very similar and kind of result in really profound cognitive impairment. And can make the person pretty incapable of managing their basic needs, like preparing meals or driving cars, managing money, and then that's only the mid stage and then the end stage could result in not being able to bathe themselves or groom themselves, or even know when they need to go to the bathroom. And so those are even signs and symptoms of the brain not working well. The brain not letting the body know Oh, it's time to scrub under my armpits, or it's time to to brush my teeth or it's time to go urinate or have a bowel movement, because the brain has dementia in it and it's no longer able to communicate those needs effectively.

Dementia can be hard to diagnose in early stages

8:12
So dementia is really complex in early stages, it can be hard for doctors to even identify it or diagnose it. We do our best to use brain scans and neuropsychological testing to identify a dementia disorder or what kind of dementia disorder the person has. But dementia can only be diagnosed with 100% certainty by doing an autopsy and looking at the brain after a person dies. So we put all of the information we are able to assess for together and then we make a clinical judgment based on science and research. And so it can be pretty accurate, but it's tough. It takes a lot of work to identify a dementia disorder. It's important to know that dementia is actually a medical condition people often confuse it for a mental health condition or personality issues. And I get it, you know, dementia can come with mental health concerns like depression and anxiety, can come with hallucinations and delusions. But at its core, dementia is a medical condition. So it's really important to have doctors, physicians, like medical doctors, involved in caring for a person with dementia.

How common are dementia disorders in older adults?

Why it's so important that you know that dementia is not a normal part of aging.

10:25
So why do I want to share this with you? And why is it so important that you know that dementia is not a normal part of aging? I'll tell you why. When you have concerns about your older loved one's memory... maybe they're showing you language problems or problem solving issues. And if these changes are causing problems in their life or concerning you, it's important to take these changes seriously and to help your older loved one to see their doctor. Sometimes these changes are actually not related to dementia, but to a different medical problem that needs to be treated or can be treated and then correct the memory problems. Other times these changes might be related to dementia. And the sooner you can work toward a diagnosis and a plan, the more empowered you and your loved one will be with living a life with dementia. And if you want more reasons, go and listen to my last episode on the seven benefits of early detection of a dementia disorder. It's so important I cannot stress enough how important early detection of dementia is.

12:05
Join me next week the conversation does not stop here. I'm going to talk more about dementia next week. So join me. If you liked this episode, be sure to subscribe and leave a review because subscriptions and reviews help people find this show. And here's why this is so important. Older adults and people who are caring for older adults, and people who are experiencing memory loss are often left out of the conversation when it comes to mental health and wellness. So do your part to include them by subscribing and leaving a review. As always, the information shared in this episode is for educational purposes only, and should not take the place of licensed medical or mental health care. I'll see you next week. Same time, same place. Lots of love to you and your family. Bye for now. 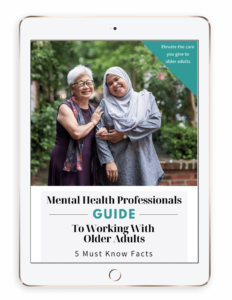 Grief and Loss During COVID (Part 2): Forced to Grieve Without a Funeral

Lauren Dykovitz was sitting vigil by her mom’s bedside while she was on hospice with end stage Alzheimer’s Disease during COVID. Lauren would imagine people lining up out the door... Has your older loved one been in the hospital since the Coronavirus Pandemic and not allowed to have family by their side to comfort and advocate for them?   This...